Neighbourhood Watch (and laugh and learn) 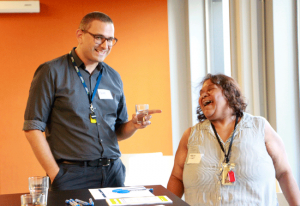 Foundation Housing hosted a “Get to know your neighbours”  event at its newest residential complex at 67 Bennett Street East Perth recently.

Invitations were sent to everyone living in the building and also all of the surrounding neighbours of the inner city complex.

Foundation Housing’s Deputy CEO Jennie Vartan said it provided a chance for neighbours to learn more about the unique 10 storey building which has a mix of one bedroom apartments and studios units.

“Our aim was to let our neighbours know about Foundation Housing.  We also wanted to  build connections between people living in the building and also with our surrounding neighbours so there is greater  trust and understanding, and ultimately to help to make it a happier neighbourhood,” Jennie said.

After being welcomed by Jennie and other Foundation Housing staff, the 30 or so people  there enjoyed meeting each other over drinks and finger food. The neighbours of the building were shown one of the units and were very impressed with the modern bright décor and large balconies.

A big thank you to everyone who attended, especially our residents and tenants.