A weekly Chaplaincy service at Foundation Housing’s largest lodging house on Hampton Road in Fremantle provides an important avenue of connection for residents who may be feeling isolated or questioning their purpose in life.  Michael Jessup, a Deacon with the nearby St Paul’s Anglican Church has been volunteering his time each week for around two years.

Michael describes his service as similar to that offered in hospitals, schools and prisons and is a model of support many of the lodging residents are familiar with and welcome. 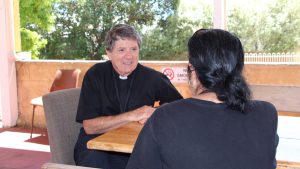 “Where appropriate I will engage with spiritual talk that’s ecumenical in nature (not aligned with any specific church, denomination or faith), and often these conversations tap into more personal questions about the meaning of life and if there’s something bigger than us. “It’s not a counselling service by any means, but I’m happy to provide an independent set of ears to the people I meet,” says Michael.

The many hours spent listening to the residents has given Michael an insight into the challenges they face. “There’s a very high percentage of damaged people here, particularly women.” Michael says there are high numbers of damaged men too, but “it’s the women who will talk to you about it more”.

He’s also observed that debt is a major stress for many residents. “People who are already doing it tough financially can really get hammered by things that wouldn’t have much impact on you or I.  A $10 penalty for an overdrawn bank account wouldn’t matter much to us, but for some of the people I’ve met with, it’s a cruel irony to get fined for not having any money in the first place.”

Michael is also active in a charitable organisation connected with St Paul’s called Just Manna which provides practical assistance to people who are in need in the local community including, from time to time, residents of Hampton Road.

Some of Michael’s two-hour long weekly sessions are busier than others, but he says coming and connecting to even one person makes it worth it. “I’m here because I think I make a difference.”