Foundation Housing recently took part in an expo for prisoners at Wooroloo Prison Farm called ‘Unlock your Future’.   Our allocations staff joined a number of other organisations at the event to provide those in custody there with information on accessing support,  accommodation, training and employment in order to help them re-establish themselves in the community after their release.

Our staff discussed accommodation options with the prisoners and also other community organisations who may be supporting recently released people who need accommodation. Expo attendees were also available to talk with us about the Street to Home program which provides support to people who access lodging (or who are at risk of homelessness) to sustain their accommodation.  Foundation Housing strongly prefers that individuals who are at higher risk of not being able to sustain their accommodation have a support plan in place with an appropriate agency or the Street to Home program before moving in.  This is identified prior to an offer of accommodation being made via a robust ‘Expression of Interest’ application process.

The prison was familiar territory for Foundation Housing’s Street to Home Team Leader, Peter Clark, as he previously worked in the justice system for many years as the Branch Manager of Transitional Services, giving him great insight into the challenges facing prisoners re-entering the community.  “Making sure people are well supported when they leave prison and that they have appropriate accommodation in place is critical in ensuring their success on the outside,’ Peter said.

‘Leaving prison can be ‘make or break’ time for many people.  If we can connect them with accommodation and support as they leave, we can reduce the risk of them becoming homeless and so make a positive impact on their lives.’

Staff will be attending a similar expo at Karnet Prison Farm later this month. 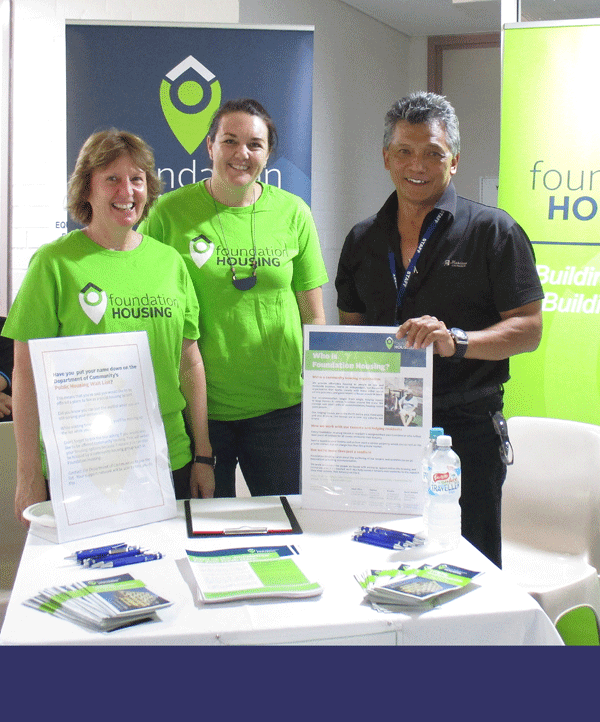