Tackling poverty in WA: let’s start at the beginning

It’s sobering to consider that around 2.2 million Australians live in relative poverty. What is particularly distressing about this statistic is that it’s estimated 731,000 of these individuals are children. International Anti Poverty Week is being observed around the world this week so it’s appropriate that we pause to consider our failure to ‘fix’ this shocking problem 30 years after Bob Hawke famously promised to have it solved by 1990.

A 2016 report on poverty in this country by the Australian Council Of Social Services found that there was a 2 per cent% increase in child poverty from 2004 to 2014, with the overall poverty rate for children significantly higher than adults. Particularly concerning is that long-term analysis indicates an overall trend of persistent and entrenched poverty in Australia. Children growing up in these conditions are at great risk of never properly escaping dependence on welfare and reaching their potential.

Foundation Housing is one of WA’s biggest non-government providers of social housing to low-income individuals. Our staff regularly visit tenants in their homes, and in doing so have gained a deep insight into the challenges low income families face and how critical every dollar is in their post housing-cost budget. We are very conscious that the rent we charge, though well below market rates, is one of the most significant costs our tenants have.

Children living in poverty – for a couple with two children that’s classed an income under $752 a week – potentially miss out on many of the extras their peers receive because the post-housing budget can only stretch so far. However, at least with the social housing safety net in place these families have more money to support themselves, as well as long-term housing security and with that the opportunity to access formal and informal networks that will help them to get by. Housing stability and the benefits that come with that are much harder for these families to maintain the private rental market.

We currently house about 890 children from families on low incomes, in over 100 suburbs and towns around WA. Add to our total the many more children living in Housing Authority or other community housing homes, and child poverty is more than likely hiding in plain sight in a street near you.

Perhaps one of the reasons that it’s not necessarily very visible is because it’s a universal truth that kids are pretty much the same at heart everywhere and one of their most endearing attributes is their capacity to live in the moment and also their sense of optimism.

Foundation Housing recently asked a range of children, including some of the children who live in our homes, to draw what they wanted to do when they “grew up”. Aspirations varied according to age, gender and personal interests, and included everything from becoming a professional netball player to a lawyer, but all of these young West Australians saw a positive future narrative for themselves.

As we consider Anti Poverty Week’s call to ‘start at the beginning’ and take action on child poverty, let’s remember the fundamental importance of providing low-cost stable housing to low-income families so that they can help their kids to be healthy, safe and included so that they can pursue their goals. We will all be richer if these children grow up to be contributing and engaged future citizens of our wealthy State. 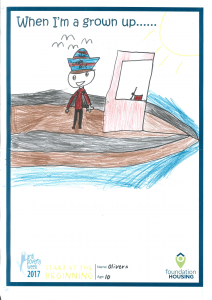 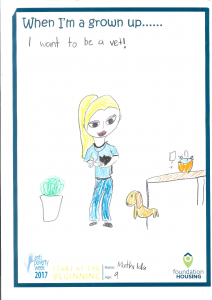 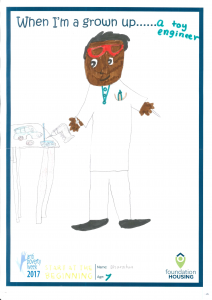 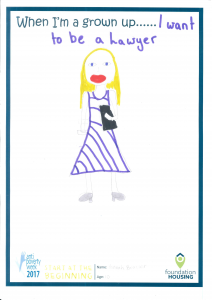